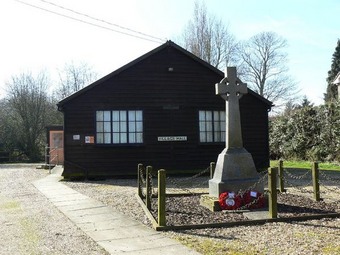 Just after the First World War the ex-wartime ‘hut’, along with the land on which it stands, was given to the village by William Needham Champion of Coney Weston House. It was known locally as the Red Triangle Hut. The triangle, displayed at the front of the hall, was removed some years ago.

The Hall is original, except for the windows, which were made by John Clarke and Noel Darkens of Hoggs, a local building firm, and were donated free.

The large painting in the hall (a copy of Constable’s ‘The Haywain’) was the work of the butler of Sir Richard Hugh Jessel from Coney Weston Hall. It was framed by John Clarke and Noel Darkens.

In 2006 a porch was added to the main entrance. This was made possible, using a legacy left by Wilf Hadleigh

In addition to regular village events the hall has been used by the Women’s Institute, the Parish Council meetings, a youth club and for pantomimes.